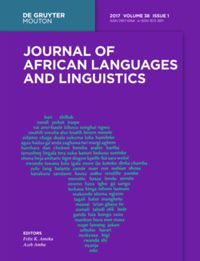 by Linguistics Public Relations
on November 2, 2021

Congratulations to Felix Kpogo on the publication of his article (with Virginia Mueller Gathercole and Jonathan Tetteh) entitled “Acquisition of doubly articulated stops among Ga-speaking children” in the Journal of African Languages and Linguistics! The article appears in volume 42, issue 1, of the journal.

Abstract: This study investigates the acquisition of labio-velar stops by Ga-speaking children in Ghana. Such stops were elicited in initial, intervocalic, and pre-lateral positions through a picture naming task. Sixty Ga-dominant and Ga-English children at 5-, 6 1/2-, and 8-years of age were tested. All age groups showed some difficulty with the doubly articulated stops, but this was relative to voicing, phonological environment, age, and input. Performance on the voiceless labio-velar stop was better than on the voiced labio-velar stop, and better in intervocalic position than in word-initial and pre-lateral positions. Older children performed better than younger children and Ga-dominant children better than Ga-English children. Performance was better when children did not receive a prompt than when they did. Analysis of modifications reveals frequent processes of simplification to labial singleton stops, some voicing changes, and the occurrence of processes of vowel insertion between the stops and /l/. These findings are discussed in terms of universals of speech sound acquisition, the role of input, and the influence of language-specific factors on children’s performance.